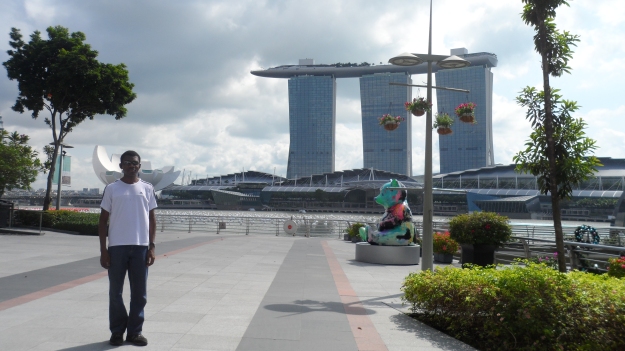 Literally. With a temperature of 29 degrees Celsius around this period of the year, the weather is a welcome relief if you were arriving Singapore from a very chilly London like I was in the second week of December this year. I would be reminded of recent warmth a few days later of course, with temperatures in the low teens in the capital city of that great island English nation. As I couldn’t immediately hit town upon my arrival due to an academic engagement the following day, I had to make do with sights I saw on my way to the hotel from Changi International Airport. Fortunately, I was scheduled to present my paper and discuss another one both on the first day of the 2-day conference. So I had a full day to explore the city before returning to London the following day. Although 24 hours may not seem like enough time to explore a city, City Sightseeing Singapore makes it possible for you to get a sense of the city if you are time constrained like I was. And it is relatively cheap. Fortunately it was a bright and sunny Saturday. Well, at least until 3pm thereabout when the heavens poured rain. The remainder of the day thereafter was wet. But no matter, that period of the day was spent window-shopping from one mall to another connected by underpasses on Orchard Road. If you have money in your pocket, you are likely to spend it once you get into any of those underpasses. And you must pass through them. The Singaporeans make sure of that.

If you were walking on Orchard Road towards the Ion Orchard mall for instance, you have to cross over Paterson Road, which intersects Orchard Road from the side I was walking from. As the road is fenced on both sides at the intersection, you couldn’t just cross. Instead, you either went down the underpass or crossed towards the other side of Orchard road and then over another intersecting road (Scotts Road) before continuing onwards. But you’d still have to walk further down and even then, the only way into the malls on the other side is down an underpass. Thus, if you were just planning to cross the road through the underpass, think again. The shops are situated just along where you must pass through. And because there are so many people trying to get through, you end up thinking may be you should take a break in one of the shops. So, if you have one of those plastic cards, hmmn. You will spend. I can guarantee that. The other major shopping district, which starts at the end of Orchard Road, is also where the iconic landmarks of Singapore are situated. At least the ones, I was keen on seeing. Encircling the Marina Bay are shopping malls, the Art Science Museum, the Singapore Flyer (largest observation Ferris wheel in the world), Gardens by the Bay et cetera. Developments around the Marina Bay are such that, you could live and work in the area without having to go anywhere else within the City. And trust the Banks to congregate their offices in the area. The skyline of Marina Bay is filled with the branded buildings of major international financial institutions.

While still at Nanyang Business School, the venue of the conference I was attending, I struck a conversation with a Singaporean student who was volunteering at the event. I wanted to know how wealthy he felt. Singapore after all has one of the highest GDP per capita in the world. The gentleman thought he was not as wealthy as the average Singaporean. His sentiment caught me by surprise. Surely, if he was attending a top business school like NBS, he couldn’t be poor? So I asked the same question again but now as a series of questions. Do you have cable TV? Do your parents rent or own the house they live in? Is any Singaporean able to attend NBS if they are accepted? His answers to these questions were in the affirmative. The “poor” guy was probably thinking about quite a number of his contemporaries driving their Ferraris and Lamborghinis with little care on the major streets of Singapore; a sign of intergenerational wealth. For a highly priced education (attending NBS for instance), the government provides financial assistance he would tell me. But the fundamental test for me of whether a country is wealthy is the proportion of its citizens that own their own homes. 90% of Singaporeans own their own homes, according to figures from the National Population and Talent Division (NPTD) in September this year. On average, these homes are 4-room flats. That should give you an indication of how “poor” my Singaporean friend really was!

Inevitably, I kept comparing Singapore with Malaysia, the country that it gained independence from in 1965. Singapore being a city-state, a fair comparison would be with Kuala Lumpur, the capital city of Malaysia. One of my regrets when I visited Kuala Lumpur in 2011 was not being able to visit Singapore just an hour away. Africans face many constraints when they travel round the world. To have tried securing a visa then to see the neighbouring city would have been a little distracting. It would take another 3 years before I’d finally get the chance. But of course, being a Muslim, you know if you were destined for something, all of the World would not suffice to stop you. So, a lesson there. Kuala Lumpur is smaller and slower-paced (according to my ‘friend’ who has a relative in Malaysia). Maybe I liked Kuala Lumpur better in spite of all these because it is predominantly Muslim. But there are lots of Malaysians and Muslims in Singapore. In fact, I got to meet my Singaporean friend because I was looking for where to say my prayers at the Business School. And he is not a Muslim. The mosque it turns out is situated on top of the Dean’s office. Ha! But then I stayed in Kuala Lumpur longer, some 4-5 weeks if my recollection is correct. It is likely I would like Singapore more had I stayed as long as well. Based on the facts, however, they are not comparable. On my 13-hour flight back to London, I did ponder how one spurned could still come out on top – Malaysia expelled Singapore from its Federation in 1965, just two years after joining. And today, Singapore is five times (5x) richer on a GDP per capita basis. A timely and valuable lesson for a young man still trying to find his way in the World.